Greetings vaqueros! Today we'll be looking at some Blood Axe ork models I've painted up over the last few years.

When I first started playing orks in 2nd edition, there weren't many vehicles around that you could buy - there were plastic ork bikers and plastic ork buggies and... that was about it. The plastic wartrakk and trukks weren't quite out yet (they came out with the glorious Gorkamorka big box set) and the ork battlewagon had already been retired, and I didn't even know about (and would have had very little chance of getting a hold of) the resin kits made by Armorcast, Epicast and so forth.

If a mekboy wanted to get his hands on some quality vehicles, he needed connections, and the best ones were of course, the Blood Axe boyz. If you knew some of them (literally just five was enough) then you could unlock the full range of Imperial vehicles to use for your own dastardly ends - as long as you painted them up sufficiently orkily!

My imagination was captured by this idea back then, fuelled by the images of orkified tanks featured in the photo galleries of Golden Demon entries scattered through the White Dwarf magazines my mates and I had pooled together, and my greatest wish was to get a Rhino or Razorback tank, open every hatch and door on them and fill them up with orks, gretchin, snotlings, the works!

Unfortunately neither my hobby skills or my wallet were up to the task back in 1995 - it's taken a few... decades... to get up to speed, but I've finally had the chance to start adding Blood Axe units and vehicles to my ork forces that I'm quite proud of, and hopefully that you will all like too.

Let's start with the obligatory 5 man squad that is the minimum requirement for a 2nd edition Ork force to use Imperial vehicles. The reason I stopped at 5 isn't just to be cheesy, it's because those models were very fiddly, conversion-wise; each arm is a reposed plastic Cadian arm from the modern ranges, pinned to the metal body of a Stormboy, (sans jump pack) and glued to an old ork hand rescued from my bitz pile - and the joins are disguised with greenstuff sleeve cuffs. Each boy was given a metal backpack sourced from 'somewhere' (no clue where they came from) and this had to be blended into the body with putty. The mixed up camoflage scheme was also a bit tricky, requiring two or three different real-life camo schemes per model. I really love the result but the idea of making and painting 15 more of them gives me the willies. 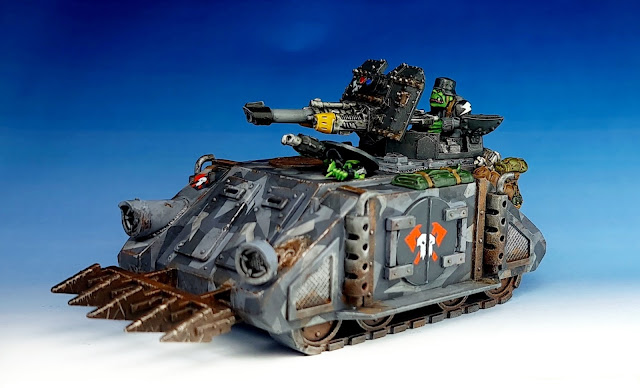 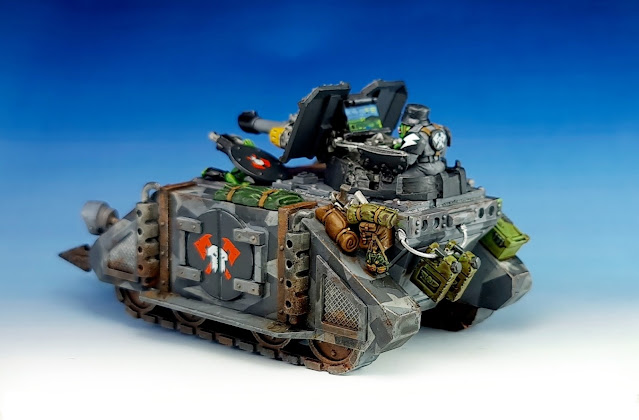 The Razorback transport is a partial fulfilment of the promise I made to my young self to really go to town on a Rhino-type vehicle. It only has one gretchin hanging out of a hatch but I did have some fun making an orky version of the gun shield, and the wide-screen TV on the reverse of it (because there's no vision slit, only cameras on the front).

Clearly this ork gunner is a bit distracted by video games but I'm sure he'll ALT-TAB out of it when the bullets start flying. 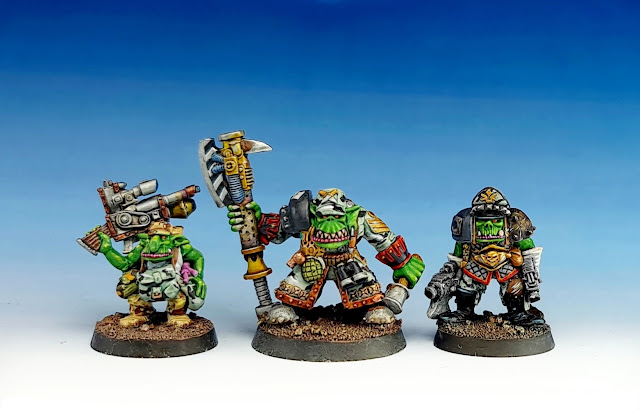 I had long desired to paint up this ork boss figure, one of the few orks Kev Adams sculpted as a single piece for the later ranges, arms and all included. I wish he'd been able to make more like this at the time, it's so fiddly trying to make the plastic arms look good (and stay attached). I converted a little servant for him from one of the magnificent Perry gretchin warmachine crew of the time; they remain some of my all time favourites miniatures ever made. I do think the angle he is carrying his boss' gun is a bit awkward but I couldn't be stretched fixing it so now I must live with it, always. Later I added a second in command so the big boss would have someone to break heads while he focused on the finer points of strat-er-gee.

These ork Kommandos were actually the first Blood Axes I painted a few years back - they were intended to be used in that not-Necromunda game, Shadow War: Armageddon. To this day I haven't played a single game of it, but it looked fun for a minute or two. These fellas have a different, more boring scheme that I should revisit, but probably won't.

Finally, this Rhino was painted up even further back, for some ogryns to travel in, because there was no rule that said you couldn't pack 5 ogryns into a Rhino in 2nd ed. Unfortunately it only took one battle to remind me of why people tended to avoid putting anything valuable in a transport in that edition - they did have a tendency to become a flaming death trap, as was seen in my old battle report on this very blog. I decided to retcon it back into my ork forces, and wish good luck to anything that sets foot in it...

Here are some WIP photos for anyone who would like to see such things. Naked minis. Mmm. 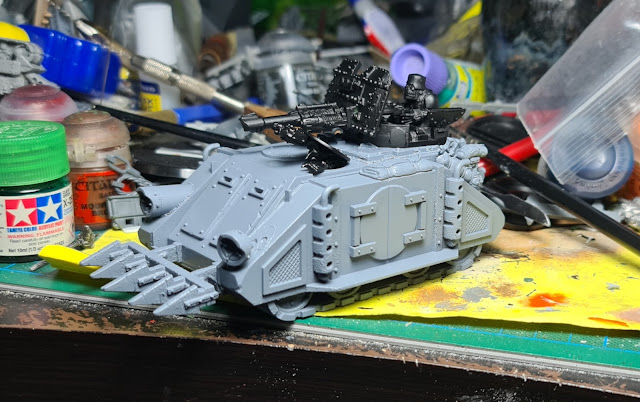 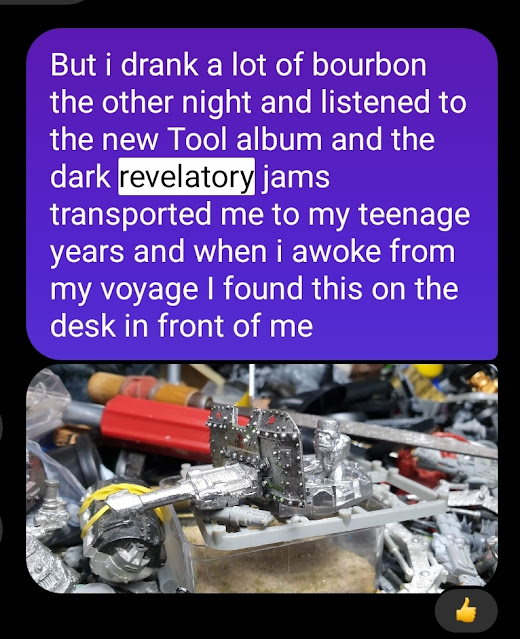 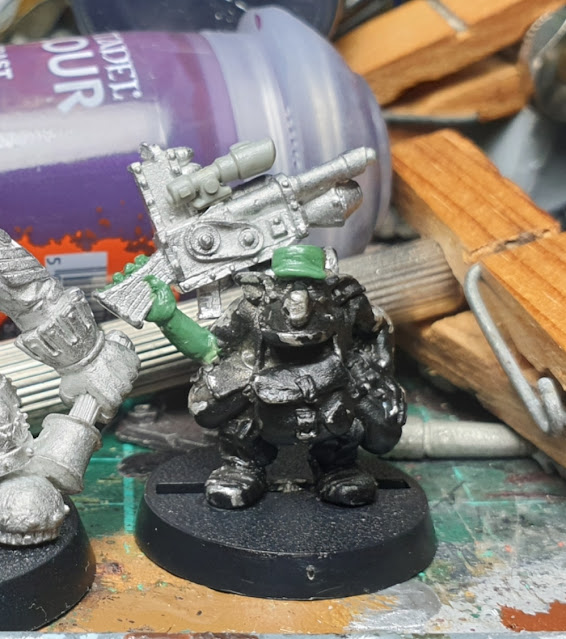 So there you have it, the Blood Axe force I've been building up over the last few years. I hope to add more to it, maybe a Leman Russ or some more boyz, maybe some ork bikers on marine bikes, that could be fun. And what's next? Well, all this talk of vehicles makes me hunger to try something new, like a whole new variant of tank! I call this one the Land Runner, and I based it on a design I saw on eBay of all places!

See you next time!