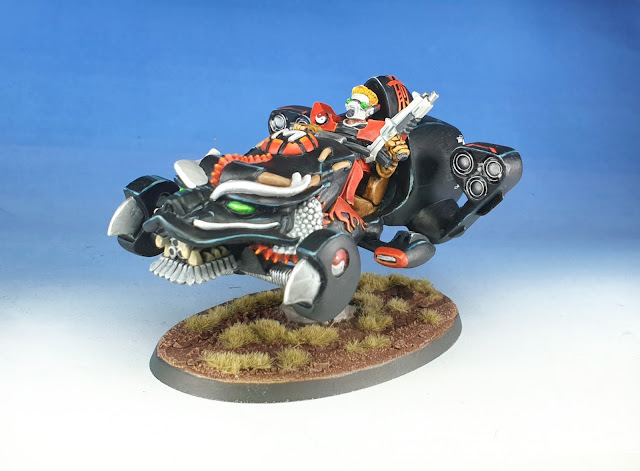 Greetings vaqueros! Today we're looking at a Mishima dragon bike I painted up for the latest Scale Creep challenge.

Warzone is a game that slipped by me back in the 90's. It was hard enough sourcing Games Workshop stuff in rural Australia, let alone models from an enthusiastic competitor. However, the warm glow of nostalgia has worked it's magic once again and suddenly these goofy offerings from the likes of Tim Prow and Kev Adams are looking better by the day.


The model is a very ambitious design to make entirely from spun white metal. It has half a dozen components that have to be assembled and painted sequentially, beginning from the rear, if you've any hope of getting paint to all it's areas. The pilot can't be left until last because he can't fit into the vehicle with the front end attached.

Did I mention this model weighs a hefty 400 grams when fully built? That's not counting the vast amount of putty I used to reinforce every join and fill the large gaps. This was a challenging model to build, not for the faint of loin!

I tried consulting the original artwork and rules for clues about what the various elements represent on the kit, and how they managed to mount something so heavy on a flight stand. It turns out they didn't bother with a stand at all - presumably they just drive it along the tabletop making 'brrrrrm' noises and leaving deep furroughs behind them.

Apparently this bike is akin to a hovercraft for tackling swampy terrain, which may explain some of the quirkier design elements, though I am convinced that the triple machinegun barrels in the dragon's mouth will swiftly clog with water weeds and Venusian tadpoles if the craft is used in the manner depicted in the artwork above.

This was a very fun, if challenging, romp back to the mid-90's, and since much of the Warzone range is still available from Prince August, I'm tempted to pick up some more Mishima minis to make a small force!

And what's next? Well, dragons aren't the only things that fly through my heart...

Adios for now!
Posted by Captain Crooks at 20:34