Season's greetings vaqueros, and welcome to a very special edition of the Funky Wenis Rodeo. Today we are sampling the game of Advanced Heroquest, a headstrong and complicated brew, but with a lemony sci-fi twist, making a delightful cocktail of carnage, shuriken fire and space vampires from another dimension. Prepare yourself for... 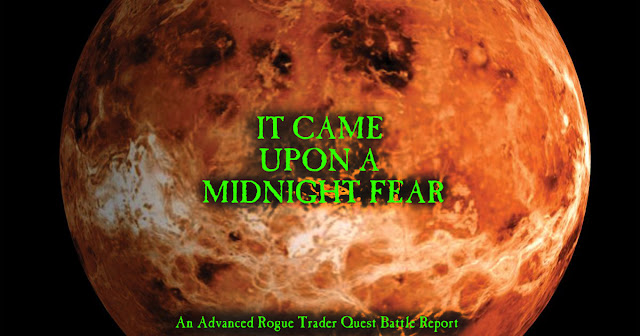 It was a dark and oddly smoky night. Four adventurers approached an abandoned outpost in the middle of nowhere.
All they knew is what the Imperial office planetside had told them - "reports of unnatural activities abound in that sector; disappearances, dismemberments, disco at odd hours. Good luck, and be careful..." 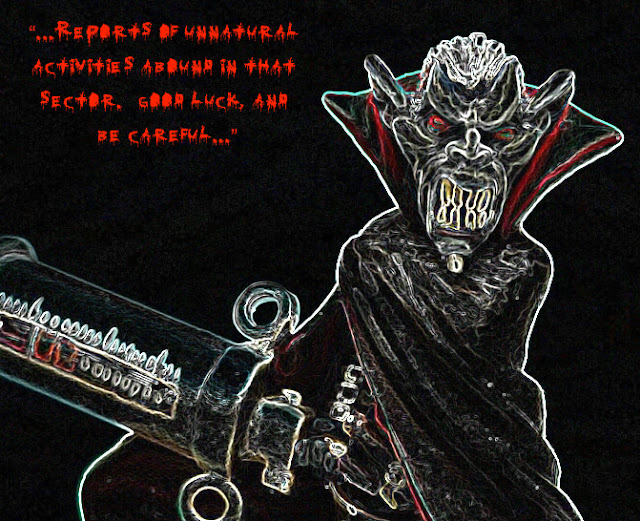 Intel led them to the alleged address: 0-Positive Drive, Platelet Crescent, Bloodton-Upon-Haemorrage. The outpost was an old listening station, long abandoned - at least, by it's human garrison. What lived there now, none living could say... 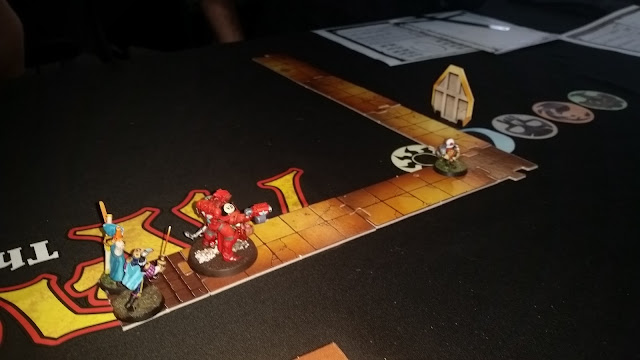 After getting the password right on the very first try ("Blood? Who would have guessed?!") the warriors searched the outpost until a secret door to an underground warren was revealed - someone or something had built a lair deep under the hill beneath the outpost. Time to sniff out this rat... 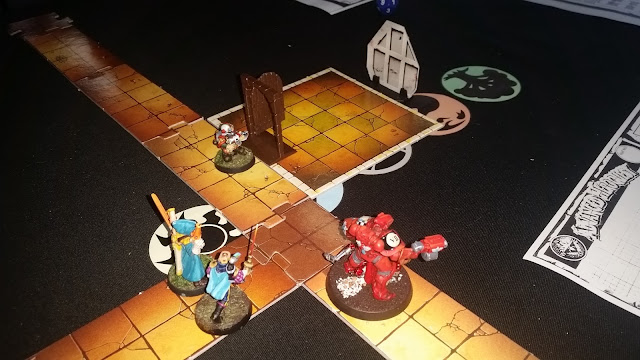 Jonathan Farker, squat mercenary and nominal leader of this motley band, approached the first door carefully, the rest of the team spreading out to cover him. The first door revealed little, save for another door. Everything was dark... too dark. And quiet... too quiet. And it smelt like ass... too ass. 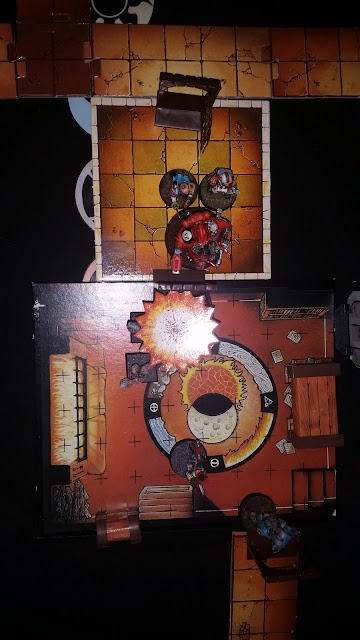 "Nary," Jonathon whispered, "There's something up there, behind that door. Wanna go see?"

Nary Sigmoron VII, Genetically Modified Human, gave a strange, electronically enhanced roar and hurled himself through the sliding metal doors with a crash, surprising a small group of hideously devolved humanoid ghouls, an android sentry and some sort of human leader - he looked like a member of one of the local gangs that had been reported missing in recent weeks. The ghouls were gross and some were doing deeply sexual things in the corner. Dr What sent a blast of pure mind power through the door, frying the brains of one of the ghouls and giving two more a terrible headache. 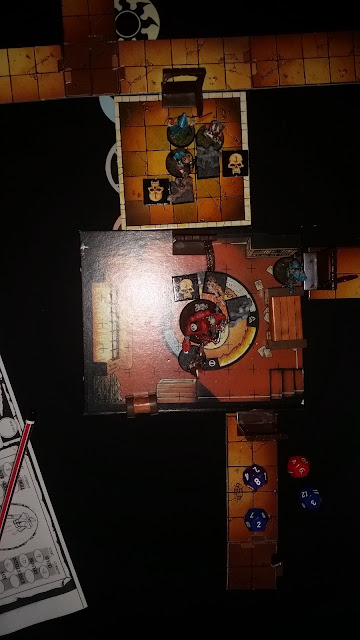 Nary raised his giant fighting robo-fist and began pummeling the deviants. Bolter shells ricocheted off his armour, and the android send hot blasts of laser energy his way as it attempted to call for reinforcements. 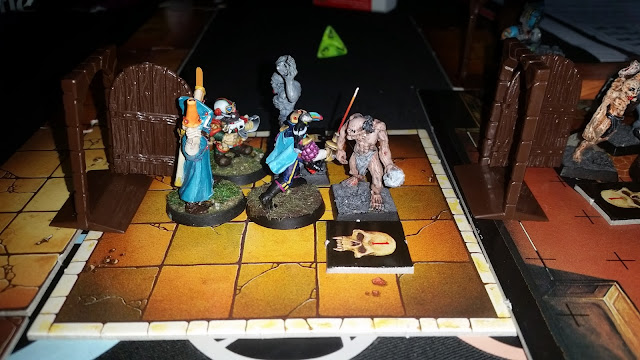 Two more ghouls appeared from the corridor, pouncing upon Dr What and Jonathon with their suspiciously sticky fingers. The good doctor used his psychic powers to heat up his sword to a white-hot tip, thrusting it through one of the beasts. The squat hacked at his enemy with his bayonet, slashing and stabbing at it's greasy flesh. 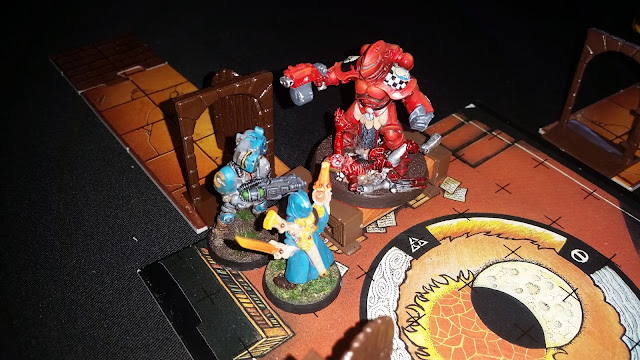 Gary and Nary double-team the android as it's dial-up modem once again fails to connect. Leaping onto a table, Nary Sigmoron VII brought the People's Enhanced Elbow down upon the oversized plasteel skull in the ultimate universal smackdown, shattering it and sending occular lenses flying all over the place. 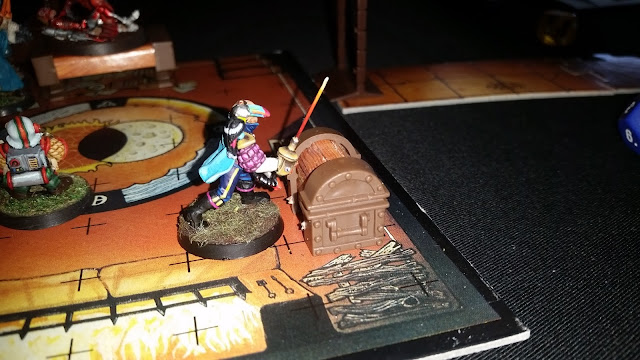 Being a rampant opportunist, Dr What opens up the chest while the others are occupied and pockets a cool 200 galactic credits. 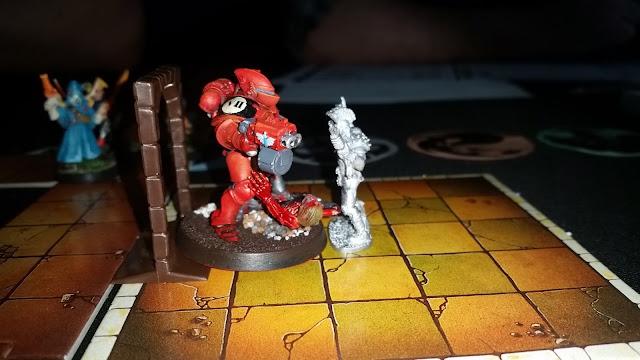 Further into the complex. Nary discovers a room containing nothing but a shiny, shiny statue. It had a large red button on it's forehead, the kind you should never, ever push.
"It looks like solid carbonite," Jonathon said, his eyes gleaming as they worked out the approximate market value of a man-sized statue made of the rare metal. "Also, don't push that button." 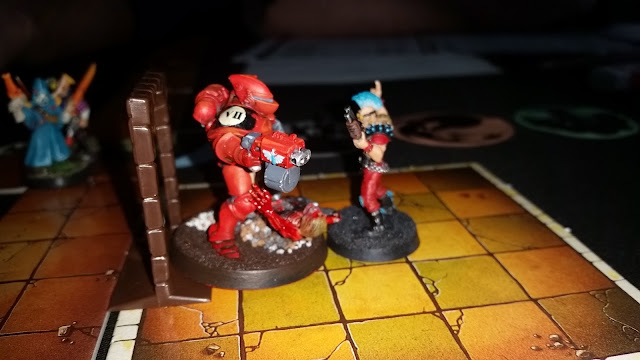 With a pulsing noise, the carbonite melted away to reveal not a statue, but a very angry motorcycle punk with a shotgun. He attacked the red-armoured warrior with much punk-rage. 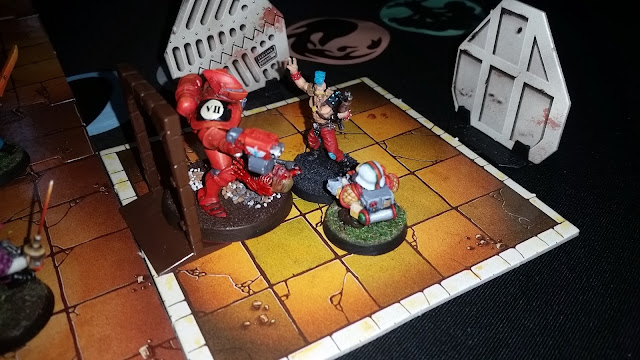 Nary and Jonathon managed to subdue Sam and steal his motorbike keys - but their mission was far from over. The dark corridors continued deeper into the complex. 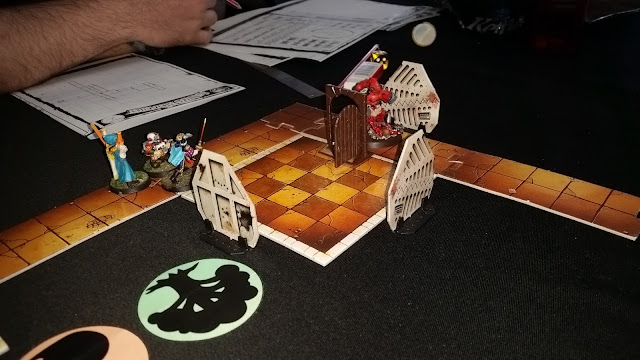 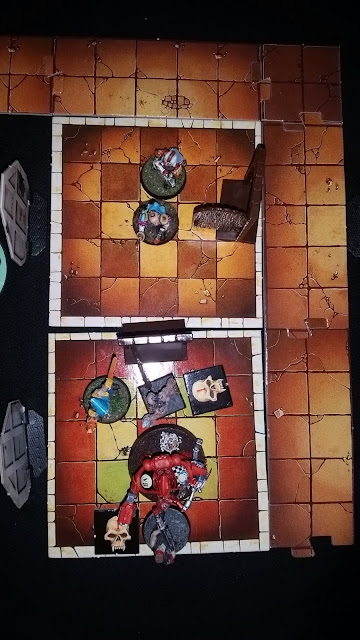 They battled ghouls and gangsters. 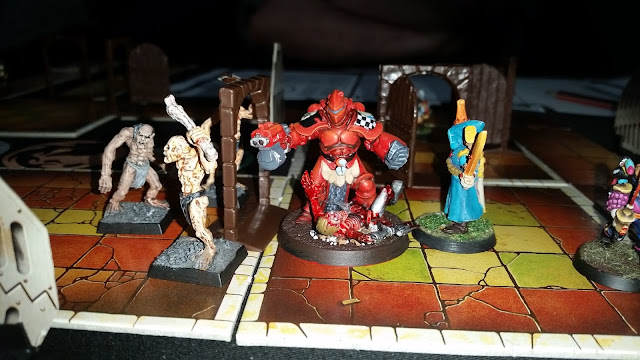 Many foul beasts met their end with a mighty fist to the grille, or with razor-sharp shurikens slicing through their nasty bodies, or with hot bolter shells exploding inside their ribs. Dr What melted mind after fevered mind, each contact bringing him closer to the truth. Something in this lair was controlling human and ghoul alike with a powerful psychic influence. The ghouls, whom once were men, were in the final stages of mind-thrall, little more than beasts. But what manner of creature could exert such control? 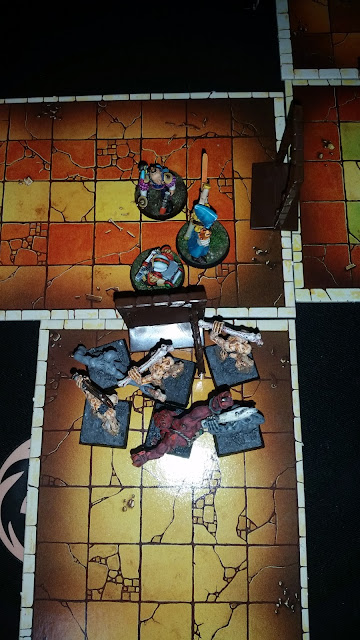 In a stinky corner of the warren they discovered the lair of the Ghoul King, a massive creature with bulging red muscles, huge raking claws tearing through flesh and armour with equal ease. His foul children surrounded him, jaws dripping foul drippy stuff, their red eyes glowing with hatred and hunger. 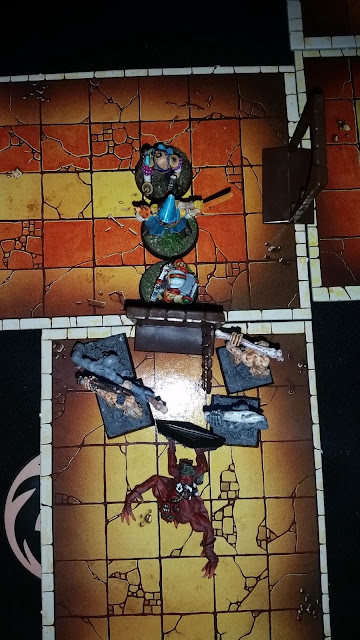 Gary and Jonathon stitched up the Ghoul King with some precision bolter and shuriken fire. The other ghouls soon followed, but the Ghoul King was not the one they sought - something even fouler lay in wait... 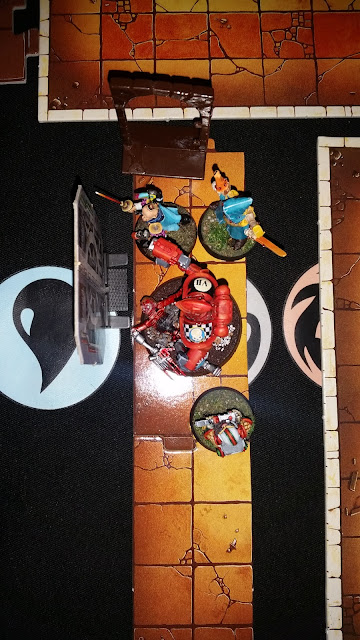 The adventurers approached the final door. There was a lot of noise coming from the other side, it sounded like chanting. With a roar of mechanical rage, Nary blasted through the door into the midst of the ultimate monster mash. 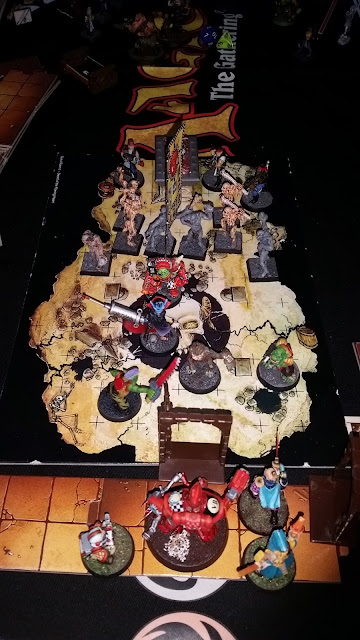 In the midst of all the commotion, a hideous figure stood in the centre of an interdimensional summoning circle. "Bahaha! Velcome to my lair, insignificant food-items. I do so like it ven fresh blut does home deliverink!" 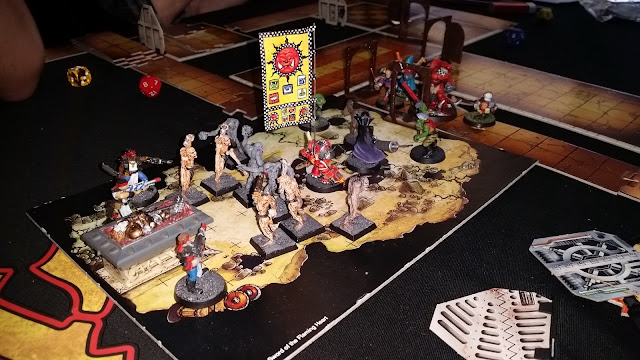 Accompanying Ham was an ork warlord in full powered armour, his small retinue, a smattering of gangers armed with lasguns, and a horde of sexual ghouls. The heroes were facing the battle of their lives! 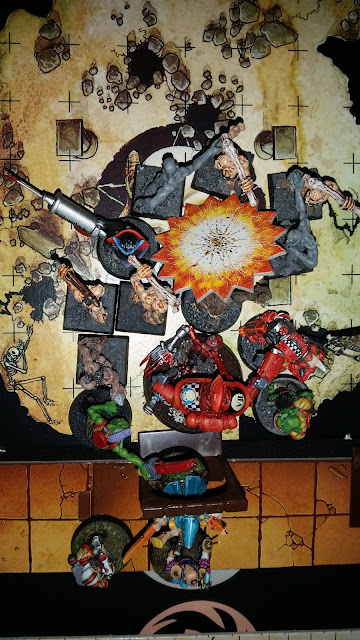 Nary waded into the throng, crushing heads with every swing of his fist. Behind him, Dr What focused his mind-powers and sent a blast of energy that injured several ghouls and exploded the brain of Furious George, evil Jokaero. Gary lined up Ham Stokyr, the space vampire, and gave him a full load of shurikens at almost point blank range. The creature swirled it's cape as the razor-sharp death perforated him. He fell to the ground, apparently vanquished.

"Ha ha!" Suddenly the vampire rose back up again as if by some invisible force. "You vill haff to to better than that, silly adventurelinks!" 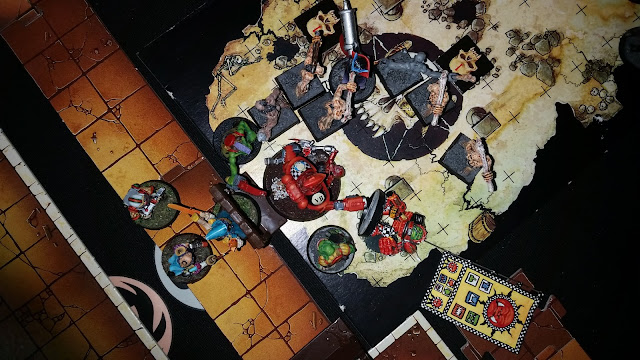 The forces of evil assaulted Nary with renewed vigor, and the red armoured warrior began to falter. He managed to land a telling blow upon Nog Nosebuster, the ork warlord, crushing his ugly green face and making his brains squirt out of his ears, but the combined attacks of ghouls, orks and lasgun fire from the back of the room was taking it's toll. As the last of Nary's strength failed him, Gary pulled out a medi-stim injector and inserted it into a slot in the warrior's support pack. With a hiss the potent serum was pumped into the superman's veins, but the results would take a turn to take effect, and the fighter was now lying at the mercy of all the gathered monsters.

Ham Stokyr stood over the fallen bulk of Nary and raised his comically oversized but extremely deadly syringe, ready to suck the juice right out of the Genetically Modified Human and use it to fill himself with supernatural strength. All he had to do was hit one, prone individual lying directly at his feet and victory for the forces of evil would  be assured! 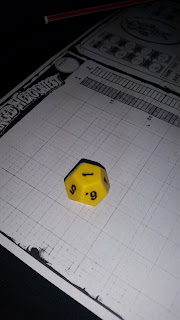 Unfortunately for Ham, he missed. 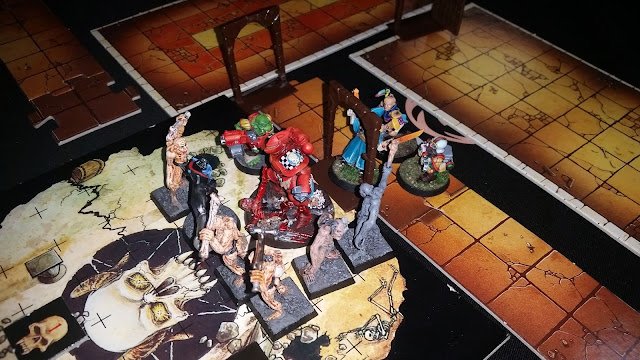 With a roar of angry vengeance, Nary Sigmoron VII rose to his feet, towering over the blue vampire.

"Come now, ve are reasonable beinks, ve can talk about this, no?" 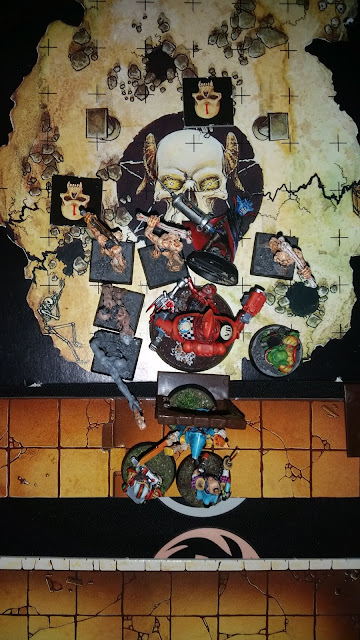 "Sorry blue-balls," chuckled Jonathon, "Nary talks with his fist. Exclusively."
Nary brought his fist down onto Ham's skull, pile-driving him a foot into the ground. The evil monster then turned into evil black goo and leaked away, evilly. 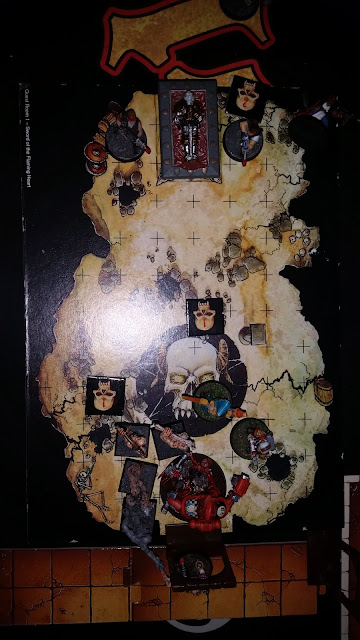 The rest of the monsters were mopped up with ease after that, and a thorough looting of the room provided a sweet haul of galactic credits which they filled their pockets with before leaving, jauntily discussing the jolly good fun they'd had. The mystery of the disappearances had been conclusively solved, and a rich reward awaited them.

Back in the lair, something hairy stirred. The stiff corpse of Furious George slowly got up out of the puddle of guts and ork blood it was lying in and stood, leering, as it's exploded brains bubbled and fizzed and started creeping back inside it's skull. The ape-thing sneered and shook it's fist as it loped off, already planning how to bring his master back once again from the dark dimension he called home...

As usual there are many folks to thank for the making of this report. My wonderful players Count von Bruno, Archaeopteryx and Christian were all good sports, and patient with me as I fumbled through a game I was largely unfamiliar with, using new rules that hadn't been tested yet. Their feedback will form the basis of an ARTQ module i'm planning to make for you all to use to play along at home. The legend of Ham Stokyr will live on in your hearts and living rooms for a thousand years!

Speaking of rules, this game simply could not have worked without the help of Niibl from the Oldhammer Forum, who sent me a draft of his 40k weapon conversions to AHQ chart. The sheer volume of work there is remarkable and far better than anything I would have come up with in the timeframe I had. You're a legend Niibl!

Finally, thanks to JB and Jon for coming up with the crossover concept and welcoming me to help test out this system as a part of their ongoing Rogue Quest project. You guys are cool.
Posted by Captain Crooks at 18:12