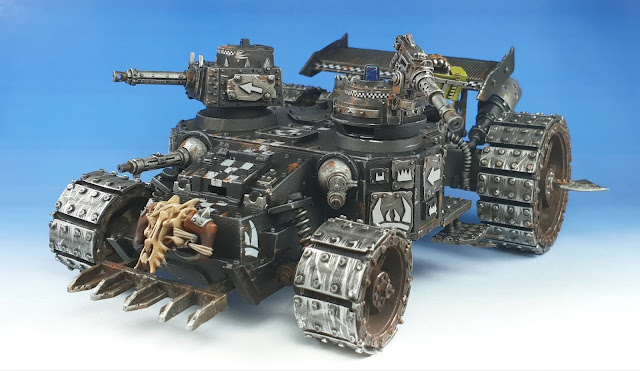 Greetings vaqueros! Today I'm going to show you this RT battlewagon that I've converted up partially using the plans laid out in White Dwarf no.131.


I've often wondered whether there was meant to be more to the RT ork battlewagon kit. The contemporary Epic range showed us wagons with hard tops and turrets, launchers and weirdboy towers - so many fun variants to grind your foes into powder with. But in 28mm land we got a dinky open topped cart with a piratey mast and some handyman tools, and while it has remained an iconic model for decades now, with a combination of nostalgia and a limited production run making it a somewhat pricey item, I still feel like we can get more out of it.

Fortunately Tony Cottrell thought so too and did a series of conversions of the kit after release, the key element of which was widening the rear wheel base and giving it a much 'meaner' stance which I've used as a jump-off point for my own conversion.

I decided from the onset that I'd be using a mix of original and modern parts to create a hybrid model that wouldn't look out of place in a Rogue Trader era army, or a more modern one. I also partially preserved the 25mm round base viewports from Cottrell's original design, using them to build up to a pair of turrets to mount some big shootas/stubbers/whatevers on. I added a pair of ball turrets where he had put some forward firing weapons on the front - it'll be a bit of a squeeze for their operators to fit into the space behind them but maybe they are grots or something. Who knows. Tanks aren't known to be spacious on the inside.
One last touch was the big skull on the front, a nod to conversions like the one in the old pic up there, but also to the original owner of this particular battlewagon, who also stuck a skull on the front of his, albeit a smaller and less inspiring one. 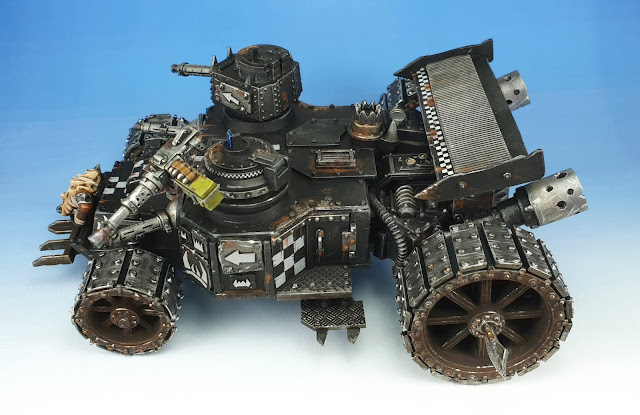 Flattening the engine down and using the original giant cylinder as the new rear axle housing means the rear half of the model is quite flat, so in addition to some gubbinz, I also added a spoiler. It was a bit of a risky choice but I reckon it paid off - despite the fact it has giant metal wheels, this thing looks like it was built for speed now, and this pleases the ork gods. 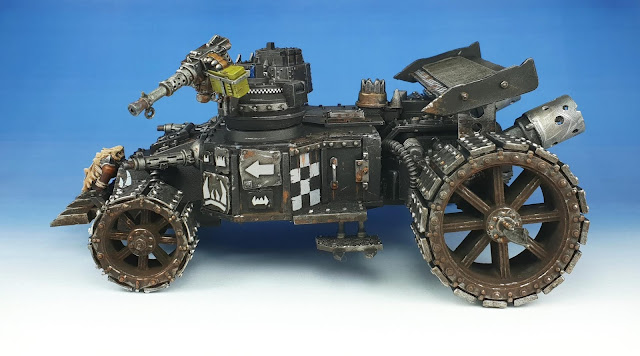 The Gobsmasha plans reuse the original exhaust pipe and add another made from a bendy straw, but the spoiler would have hid all that, so I made some big fat exhausts out of styrene tubing. After a certain point, why hold back? 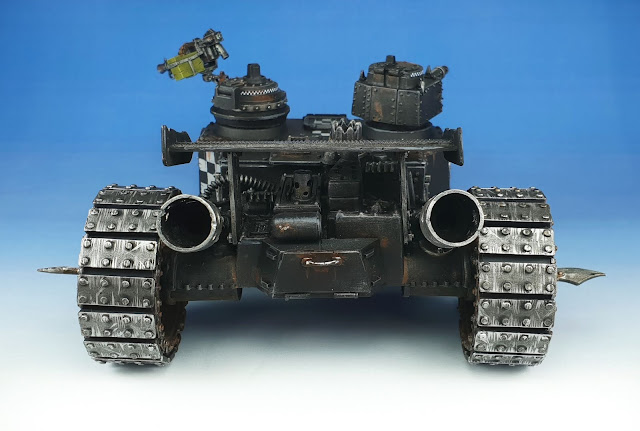 I find the concept of metal wheels a bit troublesome, but they are utterly distinctive to the model so I kept them as-is and tried to get a real scraped-up look on them. I think they contrast well with the very black rest of the whole model. I also painted quite a number of rust patches to relieve the monotony of monochrome. Jolly little rust patches everywhere. Yay for rust! Structurally unsound corrosion for the win!

Now these nobz finally have something to drive around in, maybe they will stop getting drunk and rowdy and go beat something up. I could use some peace and quiet! 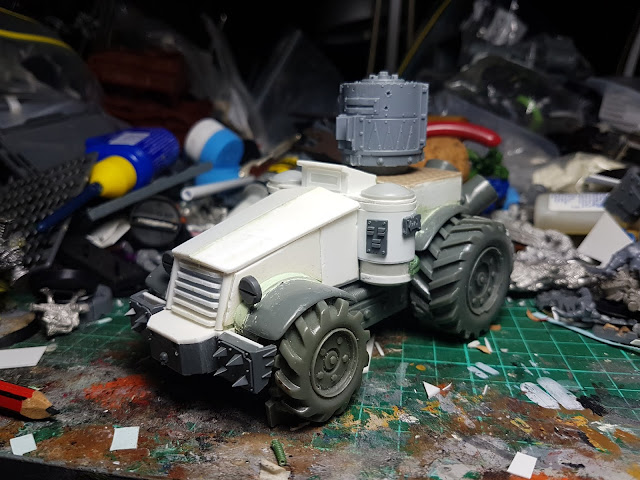